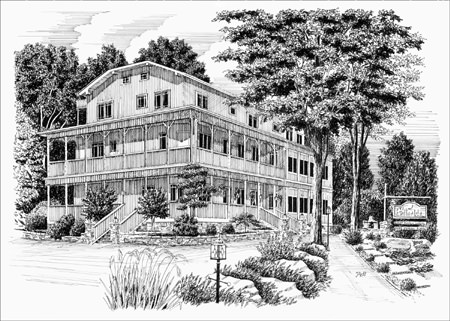 Again and again, people come through the doors of The Esmeralda speaking of a time spent here and of the wonderful memories they have. The rich Esmeralda Inn history almost speaks aloud. It is easy to imagine bygone days when stagecoaches stopped on their way to and from the Piedmont Plateau, or when early film stars hid out in this secret retreat far from the hustle and bustle of the city.

The Esmeralda Inn was originally built by Colonel Tom Turner in 1891 and opened in 1892. The original Esmeralda was used as the first stage coach stop in the area. It was later destroyed by fire in 1917, and was rebuilt on the original foundation. Turner named the Inn for the book Esmeralda by Frances Hodges Burnett, written while the author was staying at a nearby inn. A play, based on the book, enjoyed a year’s run on Broadway.  The location of the Inn became known as Esmeralda, North Carolina since a post office was housed at the Inn in 1917 and where Thomas Turner, son of Colonel Turner served as postmaster. The office was discontinued in 1926.

The Esmeralda Inn Gets Discovered

Motion picture makers discovered The Esmeralda and the Hickory Nut Gorge area in 1915. It was a favorite spot of silent movie stars and several silent films were actually filmed at The Esmeralda. Notables such as Mary Pickford, Gloria Swanson, Douglas Fairbanks, Clark Gable and others used The Esmeralda as a hideout. Years later The Esmeralda and the surrounding Hickory Nut Gorge/Lake Lure region, was rediscovered by Hollywood. Last of the Mohicans, Firestarter and most notably Dirty Dancing were a few of the movies filmed in and around Chimney Rock and Lake Lure.

When the Vitaraph troupe arrived at Bat Cave, North Carolina for the first time in 1912, they stayed at the Esmeralda Inn. They would continue to stay there through all of their subsequent visits, as would many other movie companies who were drawn to Bat Cave during the silent era.
They liked the Esmeralda Inn so much, in fact, that they asked their staff writer Charles L. Gaskill, so come up with a story to honor it. He wrote “The Heart of Esmeralda” and the film which resulted was released 105 years ago today, August 13, 1912.
“The Heart of Esmeralda” starred Edith Storey, Helen Gardner, Ralph Ince, Tefft Johnson and other members of the company.
The Esmeralda Inn still exists, in a way. The hotel burned down twice so almost nothing Storey and company would have known is there anymore. Still, it’s nice to have that tangible connection with the great days of moviemaking in Bat Cave.

Rebuilt From the Ground Up

In 1996 flood waters from the Broad river damaged many of the businesses and homes in Chimney Rock. The Esmeralda Inn opened its doors to the community as a place where people affected by the floods could stay, get fresh water or just grab a shower. For months the Inn opened it arms to help. Shortly after things started getting back to normal from the flood a devastating fire burned the Inn to the ground. The Esmeralda was beautifully rebuilt from the ground up while maintaining its original historic character in 1997-1998. The Inn is registered with Preservation North Carolina. Many of the components of the new Inn were donated from grateful residents and friends from the area. The lobby floor of the Inn was donated to the owners at the time of the extensive rebuild. The floor came from the gymnasium of the Dirty Dancing set where Patrick Swayze and Jennifer Grey danced into all of our hearts. In many of the pictures of the Esmeralda you can see the timbers that warm the lobby and entrance area. These locust trees were recovered from the Broad river during the flood of 1997 and later integrated into the Esmeralda construction.

We look forward to sharing the stories of this unique and beautiful historic retreat and hope that you will join us for a mountain getaway.

Do you have a story or photograph you can share from The Esmeralda’s history? If so, please contact us! We would love to know how The Esmeralda holds a special memory for you or someone you know.